The Orchard Park Fire Company was incorporated in the year 1883 by a group of local men to serve the Hamlet of Orchard Park and the Town of East Hamburg. In those years the Company consisted of nothing more than a ladder and a bucket brigade. It was not until the very early 1900’s that the company acquired an old frame building on East Quaker Street to become the first fire station.

Just before World War I the first piece of apparatus was purchased by the company. It was a horse-drawn wagon with a motorized rotary water pump. A few years later a chemical truck was placed in service.

Since that period the Fire Company has evolved into one of the most highly trained and well equipped fire units in the area.

The Orchard Park Fire Company has two of its old antique fire apparatus, that are still operations, however, have been moved to parade service. 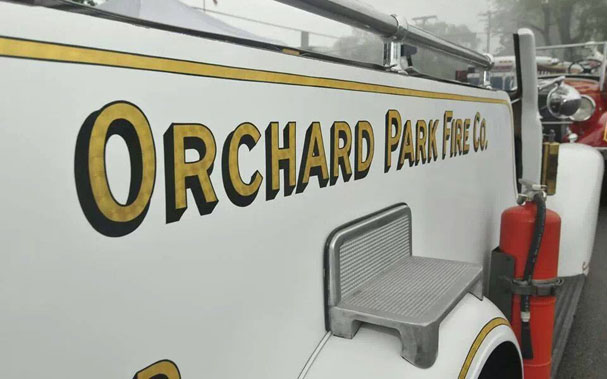 Orchard Park’s first rescue vehicle was a 1937 Buick “Special Sedan”, restored by Art Wisner of of Wisner-Rapp Machine Company after a wreck August 31st, 1938. The accident killed two prominent Orchard Park residents, Mrs. Frank Machamer, and her brother Bill Zeller. After the funeral, the car was towed back to Orchard Park and turned into an “open-air” rescue wagon.

The rescue wagon was crude by today's standards, and the older firemen still tell stories trying to keep their patients and themselves warm on those frigid Western New York nights. A stretcher went length wise with a canvas cover. On the sides, there were two boxes containing the first-aid equipment.

The Buick rescue truck was used until after World War II, when the Orchard Park Central Station acquired a new ambulance from Moses-Taylor Hospital. In 1946, the Buick went on to serve the Windom station for a number of years. The ’37 finally ended up with the fire company officer, Frank Murphy, for his off road use on the Murphy Farm. Eventually it was sold with the farm property to the Sisters of Mercy Novitiate. The novice drivers had happy times driving the old Buick over the fields, much to the anxiety of the Mother Superior. She was only too glad to get rid of the doorless car, when Fireman George Petre offered to replace it with another car.

Petre kept it for sentimental reasons in the late John Riehles Barn for 10 years, before selling it to John, an avid car hobbyist. An artist in metal and wood, John, lead a group of fireman in the restoration of the Buick as a company project, to celebrate the Orchard Park Volunteer Fire Company centennial celebration in 1983. Recently housed in a new display showroom at the fire house, this beautiful white and gold 1937 Buick can be admired by all the local residents as they walk or drive by. 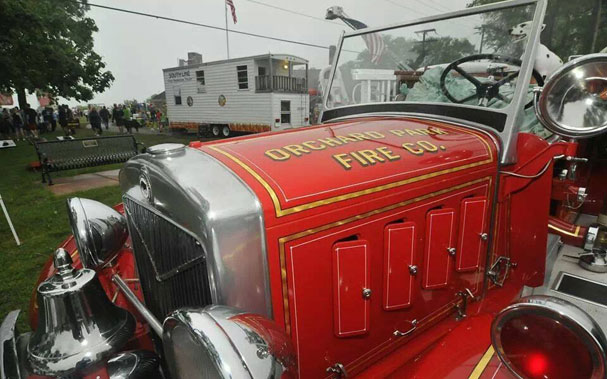 1936 Pumper manufactured by the Buffalo Appliance Company. The truck was fully restored within the last 30 years.